Do you really want success? 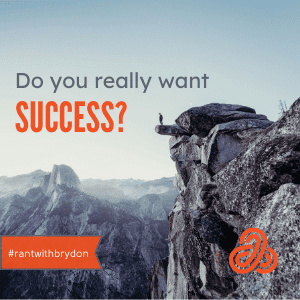 Do you really want success?

In the push-me-pull-you of life and business, everything we do has an equal and opposite effect.

When we lie – that lie always bites us in the arse sometime later. When we fight against anything – we give it power so it can fight back. The more we fight it … the more it fights back.

Whether we have a great business or not has a lot to do with whether we really want success and how we live each day.

Do we really want success, or does real success scare us?

Being that poppy for someone to tear down can be scary (tall poppy syndrome is real). Being ‘seen’ isn’t comfortable for many people. 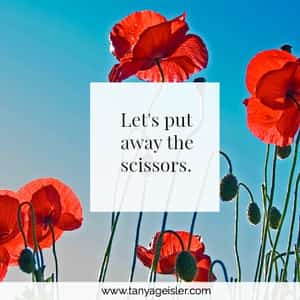 Maybe we want to stay under the radar and not been seen … because it’s safe?

We don’t want to fail so chances are we’re probably doing whatever it is we think we need to be doing to avoid that failure.

When we have these two competing forces – avoiding success and avoiding failure working together, where do you think we’re likely to end up?

And even if we deal with the avoiding success, we are still living in a way that avoids failure.

I believe that true success comes from not doing more but doing less.

The value of taking risks

We humans get in our own way and make life harder for ourselves than we need to, in almost every possible way.

We think we’re protecting our children by banning bullrush at schools because it’s dangerous and some children get hurt.

But what really ends up happening is those children banned from bullrush (and other dangerous pastimes like climbing trees) never learn to weigh up the risk of doing something versus not doing it. They never learn their limits before getting hurt. And what does that mean when they grow up as adults … nothing good.

Avoiding risks can be helpful. But taking risks away from us to learn from is never helpful.

we will never succeed without taking a risk!

We won’t get the girl or guy of our dreams if we don’t take the risk of rejection and walk up to them to start a conversation.

Test your limits and grow

We have to test our limits in anything if we want to get better.

Testing our limits comes with risk.

As adults, we think that adding more layers to everything we do will solve more problems in life. We add more rules of things we shouldn’t do or things we should be doing instead. What we don’t realise is that for every rule telling us what we shouldn’t be doing, we’re limiting our ability to grow.

Not only that, but there comes a time when there are so many rules about what we shouldn’t be doing, we get ‘stuck’ and we can’t move anymore.

Imagine that every time you did something that didn’t work out how we wanted, we received a cut to our body.

Now imagine that for every cut, we added a rule (a bandage) so we didn’t get cut/hurt again. After enough cuts, we’ll reach a point where we’ll have so many bandages on, that we won’t be able to move anymore. 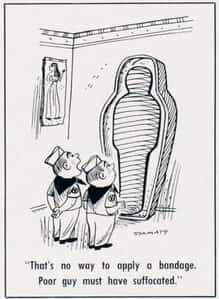 Surely it’s worth the risk to free ourself from the layers of bandages we’ve accepted over the years, so we can start moving again!

Caution: tread carefully. Those layers are like a security blanket that’s protected us in some way. And removing each bandage/layer means having to deal properly with whatever reasons we gave ourselves to accept the blanket in the first place.

So we should make sure we have some safety nets to help us through the process. Someone we can talk with to better understand our role in whatever ‘cuts’ we bandaged.

There is growth in letting go

There is always growth dealing with letting go of something or trying something new. But that growth can’t happen without us taking a risk.

Whether we deal with that growth now or later is our choice … but deal with it we will at some stage.

Life does not care what we think. Life knows what we need and will keep reminding us of that no matter how much we try to run and hide.

So the question becomes:

The choice is ours.

Good luck with what you decide.